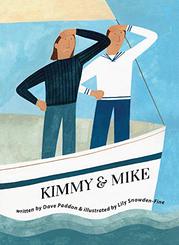 A picture-book tall tale of derring-do from Newfoundland and Labrador that continues a centuries-old tradition of recitation.

Brothers Kimmy and Mike are charged by their mother to take their punt to fish for “something for the pot!” But no fish are to be had at their usual spot, and the boys decide to “scull ’er…’cross the pond”—not wishing to face their mother’s admonishment. As the rhyming tall tale continues gleefully, the brothers encounter a merman called Saul who longs for Nepal, tackle pirates off the coast of Somalia (depicted as old-fashioned European ones), and dig their way through the Panama Canal (“We are closed; please come back again”), among many other adventures. The story, which must be read aloud for full effect, continues a tradition that began in the isolated fishing communities of Newfoundland and Labrador, as an afterword notes, when the scant leisure time was often spent making up stories to entertain family and neighbors. While the physical reality of the tale is one of happy exaggeration, the emotional reality—two tough boys abashed by their more-than-capable mother—is an endearing truth. The illustrations have a folk-art look, which both complements and compliments the recitation tradition, and, in the way of outsider art, have the knack of looking simple while actually being visually sophisticated. The merman has brown skin and orange hair while Kimmy, Mike, and their mom present White.

A rich and resonant tall tale that celebrates imagination even as it underscores enduring truths.