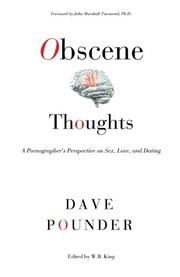 A director and producer of pornography offers his thoughts on subjects ranging from dating to marriage to career management.

Contrary to the title of Pounder’s brisk, enjoyable dissertation on the ways of love and lust, there are no truly obscene thoughts here; instead, using a variety of devices—from the boardroom-speak of business manuals to an analysis of the films of Julia Roberts—Pounder analyzes the often hypocritical ways Western society views sexual relations between men and women. He notes, for instance, that a man who walks into a bar and asks the nearest attractive woman to have sex with him would be “slapped or publicly harangued as a pervert”—which strikes Pounder as irrational, since “sex, assuming the normal types of protection, is a far more healthy form of interaction than the consumption of alcohol and tobacco, but our society condemns the former and embraces the latter.” The book features a good deal of this type of somewhat naïve candor, as well as several dubious assertions—that well-sexed people are happier or that “the majority” of men in relationships have affairs, for instance—offered as scientific fact (nebulous “findings” from organizations like the Pew Research Center are mentioned but not documented). A somewhat cynical attitude—perhaps learned in the porn trade—is often visible, as when he flatly declares that “in order to have a sexual transaction, the truth must be distorted.” In various hypotheticals, women are compared with inanimate objects—automobiles, cellphones and the like—often enough to bother some readers. But Pounder’s prose is clear and engaging throughout, and his frequently irreverent ideas about “inconsistent society norms” are not only incendiary but thought-provoking. Sometimes he oversteps, as when he claims, “Denying that the majority of men cheat is tantamount to denying that the majority of drivers speed,” but even those excesses make for interesting reading.

An iconoclastic, argument-starting take on the battle of the sexes.