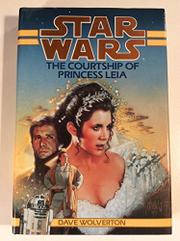 If you thought Han Solo and Princess Leia were an item—not so fast. Leia has visited the planet Hapes to plead with the Queen Mother for weapons and ships; and now the Queen Mother's son, Prince Isolder, has sent his battle fleet to planet Coruscant, along with a mountain of hugely expensive gifts. Isolder, it seems, desires to marry Leia and join his forces with those of the New Republic in the continuing struggle against the Empire. Then Han wins planet Dathomir in a card game and persuades Leia to accompany him there. Luke suspects that Dathomir also harbors someone strong in the Force and discovers the Nightsisters who fought with Yoda's Jedi long ago. With firmer prose, more realistic dialogue, and more action than the previous Star Wars outing (Kathy Tyers's bestselling The Truce at Bakura—not reviewed), this should sell at least as well. (First printing of 375,000)