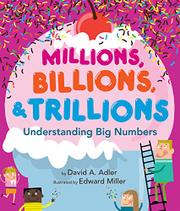 by David A. Adler ; illustrated by Edward Miller

Adler endeavors to get a grip on the slipperiness of big numbers.

Adler, along with Miller and his cut-out–style, cartoony artwork, has delivered on all manner of math, to the delight of those who turn into deer-in-the-headlights when confronted with numbers (Perimeter, Area, and Volume, 2012, etc.). Here they take a stab at wrapping young heads around millions and billions and beyond. The book starts out with “One million is a lot. It’s one thousand thousands,” but words aren’t enough. You have got to visualize. A million is the number of sugar granules in a quarter-cup measure. Spill them out on a piece of construction paper and take a gander. One million. They try to keep the mood upbeat, counting sundaes (with a billion dollars, “[a]t five dollars a sundae, you could buy one thousand sundaes every day for more than five hundred years”) or birthday parties—but they throw in the towel on a grace note and a reprieve: “You couldn’t count to a trillion.” There are also a couple of bracingly sly jabs: “Someone with one billion dollars could give away ten million dollars every year for one hundred years.” Listen up, you 1 percent. An abbreviated tour from quadrillion to sextillion is followed by the deflating news that “names for large numbers are not the same everywhere. In some parts of the world, what we call a billion is called a milliard,” but by now we have come to suspect these big numbers are pretty crazy creatures.

Adler anchors great numbers in cool facts, but once past a billion, the zeroes are still helplessly dizzying.