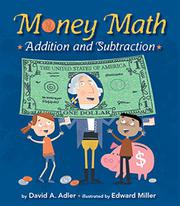 by David A. Adler ; illustrated by Edward Miller

Both Adler and Miller use a winning clarity of expression—one with words, the other with images and caricatures—to maximize the operations involved in toting up coins and keep readers visually stimulated. “The number to the left of the decimal point represents the dollars. The number to the right represents the cents.” But decimalization is not belabored, entering the story quite subliminally, for it is more important for readers to know that 100 pennies equals a dollar and that there are various permutations of coins to add up to any number between one and 100 cents; indeed, the book begins to resemble an abacus of coins equaling a particular value. (“There are 50 different ways to make 50¢.” Answers in the back.) Gradually they introduce the idea that coins operate in reverse as well: you can add them to find their worth, and you can subtract them to learn about change. The conclusion may have caregivers howling: “Doing money math is fun. Math should be fun. Some people think that going shopping and spending coins and bills is fun.” Next up from Adler and Miller: Debt Management for Six Year Olds?

A purse full of entertainment tucked into a merry primer on money math.