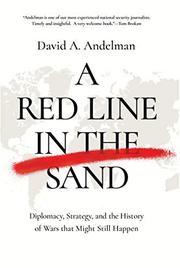 A RED LINE IN THE SAND

Diplomacy, Strategy, and the History of Wars That Could Still Happen

by David A. Andelman

A look at the world’s flash points for conflict, whose number seems to be growing exponentially.

Andelman has long served as a foreign correspondent for the New York Times and CBS News. He also studied at Harvard with the diplomatic historian Ernest R. May and the one-time master of intelligent realpolitik Henry Kissinger. Both taught him how nations have used—and should use—“lines in the sand” to indicate that beyond a certain point, no foe shall pass, physically or metaphorically. Those lines, themselves metaphorical, were once fairly distinct and relatively few. In Africa 30 years ago, writes the author, there were just two, one of which “surrounded Libya and Qaddafi’s pernicious regime” while the other marked off Chad as a warning against Libyan incursion. Now, he writes, at least 250 million Africans live along flash points such as the ones that divide northern from southern Nigeria and mark off areas contested by groups such as Boko Haram and that are closely monitored by U.S. drones operating out of neighboring Niger. The best of these thou-shalt-not-cross zones are “skillfully drawn and quite clear in their intentions.” The old Iron Curtain might serve as an example, except that the current president of Hungary, Trump ally Viktor Orbán, has ordered a $500 million containment fence built along the border with Serbia, “more high-tech, even more secure than the barrier the Soviets once built along their red line with the West.” Its message: If you’re not Hungarian, stay out. Its subtext: We don’t care that the rest of Europe is “fully united and barrier-free,” especially in a time when nationalist movements are rising in response to non-European immigrants who are, yes, crossing red lines of their own. Andelman’s points are sometimes too repetitively made, but the central truth holds: Everywhere around the world, people are digging in, and there’s a fight sure to come.

If you’re taking bets on where the next war will break out, this is essential reading.