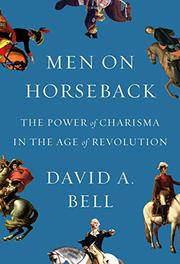 The Power of Charisma in the Age of Revolution

by David A. Bell

An examination of hero worship via thoughtful biographies of George Washington and four contemporary leaders who were all idolized at the time.

No artist portrayed Elizabeth I or Louis XIV mingling with adoring crowds, but Princeton history professor Bell points out that their nonroyal successors enjoyed a far more personal relationship with the people. They were, in the modern sense, celebrities. Ordinary citizens, writes the author, “could feel a powerful emotional connection to them—a connection heightened by their sense of the figure’s sublime, transcendent, extraordinary qualities.” The first—and least-known—of Bell’s men on horseback is Pasquale Paoli (1725-1807), a Corsican who fought for his island’s independence and became celebrated as the first apostle of liberty, aided by James Boswell’s worshipful bestseller, written long before his biography of Samuel Johnson. George Washington became America’s icon upon his appointment as commander in chief, and “even 240 years later, it is easy to take this initial surge of idolatry for granted.” Bell agrees with historians that his sense of transcendence was mostly a facade but admits that he alone of the five achieved long-lasting success. Napoleon referred to himself as the Washington of France, but he was merely a brilliant general; like most talented generals who don’t die prematurely, he self-destructed. Simón Bolívar (1783-1830) was the Washington of South America because he fought for his people’s freedom. Sadly, his elevation occurred after his death because the independent nations hated his attempts to rule, and he ended life reviled and alone. In Haiti, Toussaint Louverture (1743-1803) led a bloody slave rebellion that won admiration in revolutionary France, which subsequently outlawed slavery in its colonies before Toussaint’s death under the rule of Napoleon, who tried, unsuccessfully, to reinstitute it. Bell concludes that the rise of autocrats today indicates that charismatic leaders, especially those who maintain that achieving national glory trumps boring institutions like laws, are finding a receptive audience.

A disturbing theme explored by a capable historian.