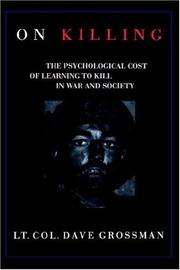 The Psychological Cost of Learning to Kill in War and Society

by David A. Grossman

Some perceptive, original ideas can be dredged out of this awkwardly written, haphazardly annotated treatise on the psychological forces that come into play in killing on the battlefield. Grossman is not shy about repeatedly describing himself and his credentials as ``a psychologist who is also a historian and a career soldier,'' having served two decades in the Army. He certainly brings a wealth of experience and diverse perspectives to this book, but despite his 20 years of military service, Grossman has not killed in combat. On the other hand, he has interviewed many men who have and has studied the literature about the psychology of killing and its aftermath. Despite his strident tone, Grossman imparts a few insightful ideas about his difficult subject. His main achievement is clearly spelling out what he calls ``society's unspoken conspiracy of deception that glorifies killing and war.'' The author shows the extremely unpleasant nature of war by illuminating the ``emotional reactions and underlying processes'' that result in the often longlasting psychological damage that befalls soldiers who kill other human beings on the battlefield. He explains that it is entirely normal when those who, in battle, have overcome our innate resistance to killing experience postwar adjustment problems, including remorse and guilt (though he notes distinct differences between those who kill at close range and those, like bomber pilots, who kill at a distance). Grossman's most valuable section is his reiteration of the special problems faced by Vietnam veterans, who came home to an often indifferent and sometimes antagonistic reception. ``Only the veterans of Vietnam,'' the author rightly points out, ``have endured a concerted, organized, psychological attack by their own people.'' A reader-unfriendly look at an unpleasant but important subject. (16 charts, not seen) (Author tour)