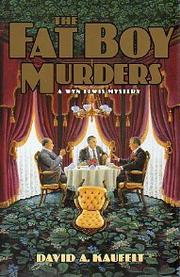 by David A. Kaufelt

Years ago, the Fat Boys—a not-so-secret society in a Waggs Neck Harbor (Long Island) Catholic high school—asserted their masculinity by tormenting sensitive Jackson Hall. Now Hall is ``arguably the most important living American artist,'' and somebody is killing the Fat Boys. Is it one of the surviving daughters—Maggie or Dolly—of original Fat Boy Bull Carlson? Lettitia Browne, who stands to inherit a Fat estate from her brother? Or febrile, vindictive Hall, who insists that he's been the intended victim of the attacks? Wynsome Lewis, a deceptively sharp real-estate lawyer returning to Waggs Neck Harbor in flight from her faithless ex and the big city, does the detecting, unwrapping the obligatory parcel of family skeletons and other unsavory secrets en route to a leisurely, literate finale. A cluttered suburban cozy—first of a new series by Kaufelt (Souvenir, 1983, etc.)—for fans of David Willis McCullough's Ziza Todd stories.