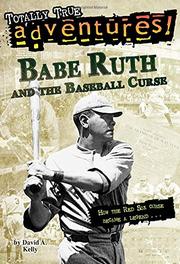 BABE RUTH AND THE BASEBALL CURSE

by David A. Kelly ; illustrated by Tim Jessell

Two nonfiction baseball stories enclosed in one cover should be a winner for newly established readers who are baseball fanatics—unfortunately, it’s not. The first is a thin sketch of the life of The Babe, the Bambino, George Herman Ruth, bad boy turned national hero, a figure larger than life. Too thin, alas: The Babe was so outsized, so personable, so human, and not enough of that comes through in this. The second story is the sad tale of the fall of the Boston Red Sox after The Babe was sold to the hated New York Yankees. Following that fateful event, Boston was in decline for decades as New York was in ascendancy. It’s an exciting story, but Kelly’s writing is flat, dependent on exclamation points and forms of “to get” instead of strong, chewy verbs—lazy and inexcusable writing in a book meant for developing readers. Furthermore, even as the book appears on shelves it is outdated, making no mention of Barry Bonds or of the Red Sox’s ignominious defeat in 2008. Too bad. (Nonfiction. 6-9)