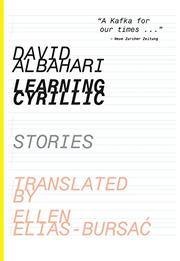 Expats, lovers and writers from Belgrade to Calgary wrestle with distance and loss in this pensive, postmodern story collection from the veteran Serbian author.

Albahari’s prior works in English translation (Götz and Meyer, 2005, etc.) emphasized the horrors of the Holocaust and Nazi rule. The 27 stories here are relatively gentle, more interior tales, though World War II remains on Albahari’s mind. In “Hitler in Chicago,” a writer meets a woman on a plane who claims to have met the dictator, delivering a final line that suggests his ghost isn’t leaving soon: “Everyone must see Hitler once in their life.” In “Tito in Zurich,” a woman takes practically orgasmic joy in a poster in her room of the Yugoslavian strongman, evoking a tension between security and surveillance. More typical, though, is the title story, in which a man teaching Cyrillic to Serbian children in a cold North American town befriends Thunder Cloud, a Blackfoot Indian; Thunder Cloud’s folk tales intermingle with the church’s and the narrator’s own Serbian background to make for a somber study of displacement. Metafictional gamesmanship abounds: Pieces like “The Basilica in Lyon” and “A Story With No Way Out” are stories about storytelling and the futility of applying order to our messy lives. (“I don’t know why I began this story, nor why my wife and I turned up in it.”) Though not exactly flash fiction, these stories tend to be brief, introducing a relationship and abstracted complication, and Albahari’s habitually open-ended conclusions can be unsatisfying. But sometimes the approach produces gems like the two-page “Squirrel, Peanut, Hat,” in which a squirrel at the narrator’s front door sparks a memory of his father’s stint in a Nazi camp. Albahari lives in a lively, quirky present, but a dark past is never far away.