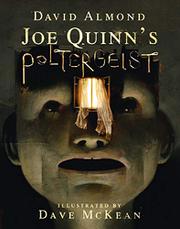 A newly illustrated edition of Almond’s psychologically acute tale of ghosts and grief in a small British town.

Originally published in the autobiographical Half a Creature From the Sea (2015), the atmospheric narrative is placed within equally shadowed, evocative scenes, sepia sketches alternating with painterly, often nightmarishly jumbled portraits or visions. Wounded souls battling tides of anger and loss abound: from inwardly focused narrator Davie, still hurting in the wake of his baby sister’s death, to the people around him, notably Joe Quinn, a mercurial youth with a dad in jail, a giddy mum, and, he claims, a household poltergeist. In the end the author leaves it to readers to decide whether the “ghost” is real or just Joe, but after a vicious fight with Joe followed by a bit of shared moon-gazing, Davie’s initial skepticism is transformed to a deeper feeling that has something of empathy to it: “I know the poltergeist is all of us, raging and wanting to scream and to fight and to start flinging stuff; to smash and to break.” The art amplifies the characteristically dark, rich tones of Almond’s prose all the way to a final Dylan Thomas–style promise that “the world and all that’s in it will continue to…hold us in its darkness and its light.” The cast is a presumed white one.

A keen collaboration moving seamlessly between worlds inner and outer, natural and supernatural