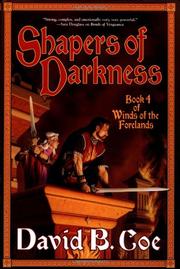 Book Four of the Winds of the Forelands

by David B. Coe

Penultimate volume of the Winds of the Forelands series, following Bonds of Vengeance (2005), in which two races—the Eandi and the Qirsi—battle for dominance.

High Chancellor Dusaan of Braedon, whose treacherous actions have incited civil war, holds immense power and aims to be the first Qirsi ruler of the Forelands. But not all Qirsi are behind Dusaan; a weaver named Grinsa has chosen to side with the Eandi kingdoms. Lord Tavis of Curgh, a prince falsely accused of murder, and Grinsa may be the only ones who can stand in Dusaan's way. While the various betrayals provide plenty of drama and surprises, the sheer number of them (along with the huge cast of characters) make keeping track a bit of a chore. There is plenty of action as well, but the narrative often becomes bogged down in feudal politics, leaving the reader eager to move on. And assuming the reader does so, there is much to appreciate, as Coe delivers a finely crafted, if not terribly original, epic fantasy.