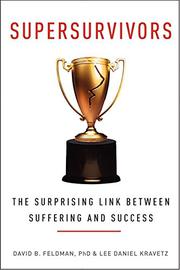 The Surprising Link Between Suffering and Success

Two psychologists provide a nontechnical exploration of how certain people not only survive trauma, but actually thrive after a traumatic experience.

Feldman (Counseling Psychology/Santa Clara Univ.; co-author: The End-of-Life Handbook: A Compassionate Guide to Connecting with and Caring for a Dying Loved One, 2008, etc.) and Kravetz use artfully described case studies to demonstrate their point, while also avoiding excessive psychological terminology. The authors base each chapter on a particular aspect of change in the trauma victim—e.g., individuals such as anti-war activist Cindy Sheehan, who was forced to reassess her understanding of the world around her after tragedy: in her case, the loss of her son in the Iraq war. For others, there is an awakening to faith, as in the case of social activist James Cameron, who testifies that he was saved from lynching by God. There are also intensely powerful stories of forgiveness, such as that of Clemantine Wamariya, who survived the slaughter in Rwanda, followed by life as a refugee. However, the very aspect that makes the book approachable also limits its effectiveness. The authors’ work is largely anecdotal in nature and does not delve into true analysis of the supersurvivor phenomenon. Though they provide some discussion of the psychological, physical and social aspects of these survivors’ stories, readers are left wondering just how often a trauma survivor thrives in such ways, and why. Nevertheless, the book is uplifting and provides hope for the human condition. Feldman and Kravetz’s closing story—about Nobel Peace Prize recipient Betty Williams—is particularly riveting. Her life was drastically changed one day when she witnessed a senseless sectarian killing in Northern Ireland. Instead of recoiling, she acted and began a peace movement that changed the history of that country.

Hope for the endurance of the human spirit in the face of tragedy.