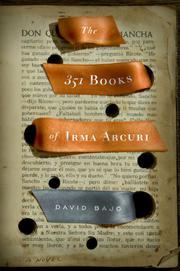 THE 351 BOOKS OF IRMA ARCURI

Philip Masryk, recently divorced for the second time and living alone in Philadelphia, is something of a savant, and he uses his semi-mystical (and entertaining) theories to decipher the messages encoded in Irma’s library—351 volumes, ranging from a pulp western to Cervantes to Borges to Marguerite Duras, and including five (largely autobiographical) books by Irma herself. Throughout, Philip finds himself teased, winked at, manipulated—through Irma’s own fiction, her interpolated notes in the texts of others, elaborately faked additions, numerological traps, and more. He gets entangled with a translator named Lucia, a doppelgänger for Irma, who between bouts of spirited lovemaking spurs and cajoles him—and who seems, more and more, to be enmeshed in Irma’s web herself. It turns out that omnisexual Irma has been conducting affairs with every principal in the book—not only Philip but both ex-wives, his stepdaughter and his stepson, who takes off for Spain to find her, with Philip close behind. It’s an intriguing setup, and the book succeeds best while praising the pleasures of reading, in the way it captures the feeling one gets, in a good book, that wherever one looks there is some residue of amazing design. Wittily allusive, it offers offbeat readings of works like Don Quixote as well as disquisitions on everything from Spanish urban geography to bird’s-nest soup to bookbinding to steeplechase. But despite flashes of promise, the book doesn’t coalesce. The sex scenes are comically overlush and overearnest, and Irma remains a cipher, less a genuine mystery than the focus of strenuous mystification: “I think she is the most remarkable thing on this earth. She keeps herself free, Philip…She lives by what she learns and she learns by feeling.”

Ambitious and intelligent but overstuffed.