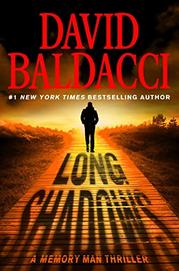 A thriller with bloody murders and plenty of suspects and featuring an unlikely partnership between two FBI investigators.

FBI consultant Amos Decker has a lot on his mind. The huge fellow once played for the Cleveland Browns in the NFL until he received a catastrophic brain injury, leaving him with synesthesia; he sees death as electric blue. More pertinent to the plot, he also has hyperthymesia, or spontaneous and highly accurate recall. On the one hand, his memories can be horrible. He’d once come home to find his wife and daughter murdered, dead in pools of blood. Later, he listens helplessly on the telephone while his ex-partner shoots herself in the mouth. On the other hand, his memory helps him solve every case he's given. Now he's sent to Florida with a brand-new partner, Special Agent Frederica White, to investigate the murder of a federal judge. Both partners are pissed at their last-minute pairing, and they immediately see themselves as a bad fit. White is a diminutive Black single mother of two who has a double black belt in karate “because I hate getting my ass kicked.” (The author doesn't mention Decker's race, but since he's being contrasted with his new partner in every way, perhaps readers are expected to see him as White. Clarity would be nice.) Their case is strange: Judge Julia Cummins was stabbed 10 times and her face covered with a mask, while her bodyguard was shot to death. Decker and White puzzle over the “very contrarian crime scene” where two murders seem to have been committed by two different people in the same place. The plot gets complex, with suspects galore. But the interpersonal dynamic between Decker and White is just as interesting as the solution to the murders, which doesn't come easily. At first, they’d like to be done with each other and go their separate ways. But as they work together, their mutual respect rises and—alas—the tension between them fades almost completely. The pair will make a great series duo, especially if a bit of that initial tension between them returns. And Baldacci shouldn’t give Decker a pass on his tortured memories, because readers enjoy suffering heroes. It's not enough that his near-perfect recall helps him in his job.

Fascinating main characters and a clever plot add up to an exciting read.