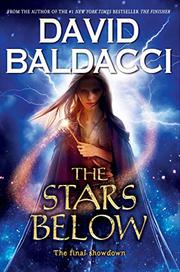 From the Vega Jane series, volume 4

The rebellion against an evil archmage and his bowler-topped minions wends its way to a climax.

Dispatching five baddies on the first two pages alone, wand-waving villain-exterminator Vega Jane gathers a motley army of fellow magicals, ghosts, and muggles—sorry, “Wugmorts”—for a final assault on Necro and his natty Maladons. As Necro repeatedly proves to be both smarter and more powerful than Vega Jane, things generally go badly for the rebels, who end up losing their hidden refuge, many of their best fighters, and even the final battle. Baldacci is plainly up on his ancient Greek theatrical conventions, however; just as all hope is lost, a divinity literally descends from the ceiling to referee a winner-take-all duel, and thanks to an earlier ritual that (she and readers learn) gives her a do-over if she’s killed (a second deus ex machina!), Vega Jane comes away with a win…not to mention an engagement ring to go with the magic one that makes her invisible and a new dog, just like the one that died heroically. Measuring up to the plot’s low bar, the narrative too reads like low-grade fanfic, being laden with references to past events, characters who only supposedly died, and such lines as “a spurt of blood shot out from my forehead,” “they started falling at a rapid number,” and “[h]is statement struck me on a number of levels.”

Awful on a number of levels—but tidily over at last.