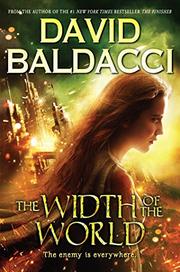 THE WIDTH OF THE WORLD

From the Vega Jane series, volume 3

Vega Jane and her cohorts at last find the home base of the evil wizards who have conquered the world—and discover that rebellion carries a high price.

Having escaped the town of Wormwood and the spell-protected wilderness around it in search of her family, newly fledged sorceress Vega Jane now confronts the Maladons—malign magicians who have ruled everywhere else for eight centuries over a populace brainwashed into mindless contentment. Working from a mansion that the head Maladon visited in olden times but is now somehow hidden (internal consistency is not a priority here), Vega Jane recruits and trains a small army of magicians to fight back while effecting rescues and eluding multiple ambushes with help from a ring of invisibility and spells that involve pointing wands and shouting words such as “Embattlemento” and “Engulfiado” that beg (unfavorable) comparison to J.K. Rowling. Baldacci mixes adolescent snogging, animate housewares, another talking book (see Volume 2, The Keeper, 2015), and bad guys uniformly dressed in pinstripe suits and brown bowlers into a tale that also features casual killing, torture, and forked-tongued demons. Throughout, he continues to demonstrate that he doesn’t have Rowling’s knack for mixing sly fun with truly dark doings. Moreover, repeated glimpses of characters with dark or brown (or “walnut”) skin are at best weak efforts to inject diversity into the cast.

A quest fantasy that moves further into mediocrity despite plenty of borrowed notions and tropes.