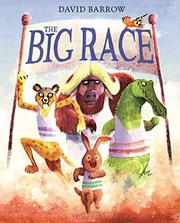 Participation awards are for people who try.

And Aardvark wants to try! On the day of the big race, she sets out to compete in a race that traditionally features the, “fastest, biggest and strongest” animals in town: Cheetah, Buffalo, and Crocodile. Although the trio is skeptically hostile, Aardvark vows that she’ll enter and that she’ll have fun competing. Over a series of obstacles that see the race’s leader change multiple times, Aardvark stays in last place until the final minutes of the race. While the final result may be a bit of a surprise for some readers, the message of inclusion creates a heartwarming end. Barrow’s story is amusing but far from groundbreaking. The colorfully mottled illustrations are bright and inviting, but they may cause the odd head-scratch from astute readers: Why is crocodile in third place during the swimming portion of the race? How did everyone get a hot air balloon except Aardvark? She registered, too. And how, after plummeting from high in the sky, does Aardvark survive when her helium-balloon conveyance pops?? These quirks aside, the book is perfectly adequate. Aardvark makes a comical contrast to the powerful animals, with her stubby legs, elongated snout, and expressively droopy ears.