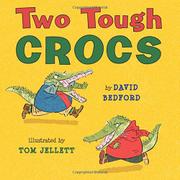 Two tough crocs learn that there is always a bigger, tougher croc in the swamp.

Jellett’s two saurian bullies, Sylvester and Arnold, live in a big swamp. They have never even met. They both wear tough-croc shorts, so what else is there to say? One day, they accidentally meet. There is a showdown: They glare at each other before clinching in a fearsome two-clawed grip. (This is all tamely farcical as drawn in fruity colors by Bedford, though with just enough menace in the crocs’ eyes to keep things from unadulterated silliness.) Then they hear a hiss. It’s Betty the Bad, the biggest, toughest croc in the swamp, who wouldn’t think twice about “messing up their toys.” Sylvester and Arnold soon find themselves shivering in the slimy bog, waiting for nightfall and a dash to happier swamp grounds. When they try to make their escape, Betty spots them. The two little bullies clutch each other, and what does Betty see? A four-eyed, eight-clawed, teeth-rattling, knobby two-tailed something...something scary. A friendship is born. Despite its modest charms, there is not much of a story here, nor is the twist memorable enough to withstand many exposures.

Good for one time around the block, though probably not for two.