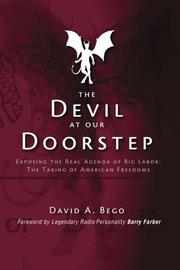 THE DEVIL AT OUR DOORSTEP

by David A. Bego

An entrepreneur’s account of building a nationwide cleaning business and undergoing an attempt by Service Employees International Union to unionize his workers.

If readers skip the prologue—which compares union organizing tactics with Nazi Germany—they can start with the many issues that merit discussion. Bego (Devil at My Doorstep, 2009) launched a commercial cleaning services company, Executive Management Services, in 1989. Based in Indianapolis, the company grew to more than 5,000 employees in locations throughout the country. Its increasing visibility attracted the attention of Service Employees International Union, and thus began a five-year battle for the hearts and minds of Executive Management Services’ workers. Labor unions’ historical efforts to protect workers from unsafe working conditions as well as ensuring fair wages and job security account for positive changes in many American industries, and that’s not disputed here. The core questions Bego raises, however, are: What should the unions’ role be in this era of global economy; what are American workers’ rights regarding unionization; and what are the rights of entrepreneurs pursuing the American dream of business ownership? Bego posits that modern unions aim to increase their dues-paying memberships in order to sustain their own viability and influence legislation, regardless of workers’ genuine needs. The author also emphasizes a push to pass the Employee Free Choice Act—legislation that eliminates secret ballot elections used by workers to choose union representation—in light of the tactics used by SEIU to unionize employees who had not necessarily even invited SEIU to represent them. He asks excellent and valid questions, which elsewhere can often be obscured by partisan labeling. Bego notes in a statement to Congress, “Americans need to demand more nonpartisan openness, research, dialogue, and civility from their elected officials on both sides of the aisle.” Why wait to be elected?

Beneath the conservative-versus-liberal parrot-speak is a coherent, timely conversation about the power and relevancy of today’s labor unions.