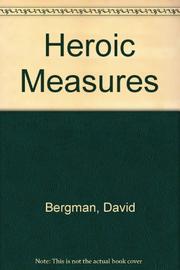 paper 0-8142-0784-7 Towson State English professor and editor of numerous anthologies of gay fiction, Bergman (Cracking the Code) relies on his superb knowledge of traditional prosody in the various forms he so purposefully explores in this, his second collection. The short dialogue between Death and a beautiful Young Man, which opens the volume, sets the elegiac tone for a dozen or so graceful poems about AIDS—from a witty portrait of a wild transvestite who died by accident, unlike his co-workers at the hair salon, each dead by disease, to a narrative about taking part in a clinical study of HIV. —Days of the 1970s— tells the history of the decade simply by its clever rhymes: —AIDS,— —escapades,— —parades,— and —raids.— Cats figure in poems about desertion by a lover and about memory of a friend recently dead. Bergman’s —transgressions— against —entropy— include smart lyrics about grubs at night, planting a garden, a mockingbird that sounds like a car alarm, and a group of poems inspired by art and travel. A skilled narrative artist, Bergman tells the chilling tale of a psychic, consulted by the police, who realizes that a missing boy was killed by his mother, and he also captures the voice of a female primatologist who prefers her monkeys to men. Poems about his aging father, including the wonderful title piece, combine Bergman’s campy charms with his expressive clarity: While his father asks that no —heroic measures— be taken to sustain his life, his son preserves that life quite elegantly in his own strong measures.