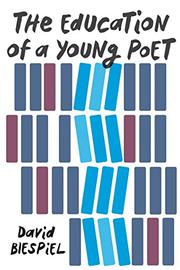 THE EDUCATION OF A YOUNG POET

Tracing the evolution of a poet’s passion.

Growing up in Houston in the 1970s, award-winning poet Biespiel (A Long High Whistle, 2015, etc.) had no aspirations to be a writer. Even as a high school student, though, he loved language. He studied Latin with an inspiring teacher, and as an English major at Boston University, he was entranced by the poets he discovered in the Norton Anthology of Modern Poetry: Whitman, Yeats, Stevens, and Auden, among them. Working in a Boston bookshop, he writes, “nearly perfected the romance of myself as a liberal intellectual.” He was inspired, as well, by the elegant speeches of John F. and Robert Kennedy: “part of the reason I became a writer,” he writes, “comes in part from memorizing those words and wishing to embody them in my own.” However, for Biespiel, appreciating others’ words seemed a world apart from writing, a process that accrued “word by word, phrase by phrase, line by line.” He brought to the process lessons he had learned during training as a competitive diver; diving, “a sport of continual adjustments,” taught him “that every time I start a new poem I’m having to learn to figure out how to write poetry all over again.” Diving became “a peculiar sort of model for literary life—for training, for discipline, and for patience.” The author’s literary life began in a small town in Vermont, where he felt “far removed from the bright streets of my East Texas upbringing” and from his family’s Jewish immigrant origins. “It was like I was taking revenge against my life.” From the work of poets like Seamus Heaney and Yves Bonnefoy, Biespiel hoped to learn “how to get my poems to open up to me. And I could hear my poems pleading back to me to be patient. I was lit up with lust for my writing.”

Lyrical, affectionate anecdotes about friends and family round out the author’s graceful reflections on creativity.