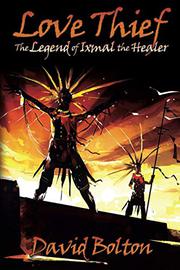 The Legend of Ixmal the Healer

In this debut ancient Mayan adventure, the son of escaped slaves chooses nonviolence while his father prepares to exact vengeance on his former masters.

Seventeen-year-old Ixmal, of the highland jungle Ppentaca people, visits an altar dedicated to Chac, god of rain. As his father and village chief, Totec, prepares to march an army into the Feathered Kingdom, Ixmal senses disaster ahead. Totec, once a slave in the Feathered Kingdom, listens to the guidance of Hunapu, the village prayer-maker, that now is the time for retribution. To ensure victory, the warriors will sacrifice a child, to which Ixmal says, “If you allow this slaughter, the cause is doomed.” Disgusted with his son, Totec marches without him across the No Name River and into Kuma lands. Initially, the force of 500 men encounters abandoned villages. Only when the Ppentaca begin burning a path toward the Feathered Kingdom’s capital of Ocochac do opposing warriors attack. Totec and his army are destroyed. Shanti, Ixmal’s mother, allows the teenager to leave the village to settle his father’s spirit. He follows Totec’s trail, arriving in the village of a woodcarver named Pich and his daughter, Sahache. After seeing Sahache perform a dance celebrating her passage into womanhood, Ixmal grows enamored and decides to settle with Pich as a farmer, all the while learning what he can of his father’s fate. Bolton offers a quiet thriller that will educate readers about ancient Mayan culture and myth. He places a glossary before the novel featuring terms like “yollotl” (heart, soul), though it’s fun to decode the Mayan vocabulary sprinkled throughout the narrative. Iku, a Kumanian who dreams of an invasion, is an intriguing villain who rises to prominence opposite Ixmal. The author roundly presents the inner lives of his cast, as when Pich wonders: “What quarrel” do the invaders “have with the Feathered Kingdom? That no elder had asked these questions troubled him.” Perhaps most affecting is that these characters’ lives revolve around a harsh environment that, during stretches of drought, threatens society and any progress the enlightened king, Quetzal the Young, might hope for.

An excellent tale that serves as both a thriller and anthropological portrait.