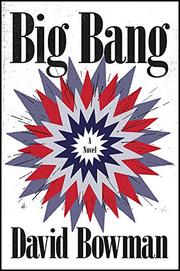 A kaleidoscopic portrait of America in the years leading up to the assassination of John F. Kennedy—and a chillingly prophetic vision of how we got to where we are.

This is a novel that Bowman, the author of Let the Dog Drive (1992) and two other books, left unpublished when he died of a cerebral hemorrhage in 2012. But unpublished does not mean incomplete. Bowman articulates a vivid point of view in this novel, or, more accurately, a series of points of view, beginning with a prologue in which a variety of historical figures (Norman Mailer; Elvis; J.D. Salinger’s young daughter, Margaret) react to the killing of the president. From there, the action shifts to Mexico City in 1950 and the confluence of some unlikely expatriates, including William S. Burroughs and E. Howard Hunt. “The novel you are about to read is true,” Bowman writes. “All the people who are mentioned—just as Bob Dylan sang—I had to rearrange their faces and give them all another name. Still, this novel is true history.” What Bowman is saying is that history is itself a story, one we tell as much as live. His juxtapositions of incidents and individuals are, in that sense, as much constructions of his imagination as they are mashups of overlapping events. Albert Camus and Maria Callas carry on an affair. JFK and Aristotle Onassis commiserate—and strategize—over the Kennedys' stillborn child. Bowman is sly about acknowledging his inspirations: Mailer, as established in the opening, and also Don DeLillo, whose Underworld this novel resembles and who appears as a young advertising copywriter. And yet, to call the book derivative is to miss the point. Instead, it is sui generis, the kind of novel that invents its form out of its own frenzied convocation of voices and moments: the 20th century in all its majesty and fear.

Bowman’s testament is both lament and celebration—for the betrayed promise of the United States as well as the tragedy of the author’s premature demise.