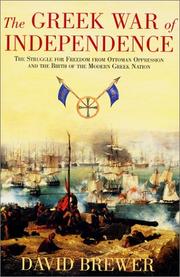 THE GREEK WAR OF INDEPENDENCE

In sturdy but ordinary prose, a freelance historian tells the complicated story of the war that took the life of Lord Byron and freed Greece from Ottoman rule.

Brewer (a one-time classics scholar with a half-century’s interest in Greece) debuts with a thorough, if occasionally sluggish, account of a struggle that ultimately involved the great powers of Europe and consumed virtually all of the 1820s. After the Turks captured Constantinople in 1453, Brewer argues, “Greece became a small, poor and backward part of this great empire. . . . ” It was principally the Christian church that enabled the Greeks to keep their dwindling sense of national identity. By the early 19th century, time was ripe for talk of liberation to become action. In September 1814, three Greeks founded a secret society to foment the uprising they hoped would result in liberation. Brewer confidently guides us through the seven complex years before hostilities erupted in March 1821. At first the Greeks were out-gunned, out-shipped, and out-manned, but a number of early victories greatly improved morale—and encouraged foreign investors and sundry philhellenes to adopt the Greek cause. (One young idealist who showed up to fight was a Spanish girl dressed as a man.) Brewer does not withhold the full measure of gore: Following their victory at Chios, for example, the Turks sent a grisly shipment of Greek heads and ears to Constantinople. Brewer devotes several interesting chapters to the intertwined stories of Lord Byron and his friend Edward John Trelawny (the latter snatched Shelley’s heart from the funeral pyre in 1822 and later barely survived an assassination attempt in a Greek stronghold). And Brewer, ever in command of his facts, explains the effects of sizable British loans, the attempt to forge a constitution and find a king; he relates, as well, the world’s last major naval battle involving ships powered only by the wind.

A nutritious but heavy loaf that lacks the leavening of felicity.