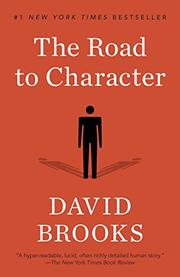 THE ROAD TO CHARACTER

New York Times columnist Brooks (The Social Animal: The Hidden Sources of Love, Character and Achievement, 2011, etc.) returns with another volume that walks the thin line between self-help and cultural criticism.

Sandwiched between his introduction and conclusion are eight chapters that profile exemplars (Samuel Johnson and Michel de Montaigne are textual roommates) whose lives can, in Brooks’ view, show us the light. Given the author’s conservative bent in his column, readers may be surprised to discover that his cast includes some notable leftists, including Frances Perkins, Dorothy Day, and A. Philip Randolph. (Also included are Gens. Eisenhower and Marshall, Augustine, and George Eliot.) Throughout the book, Brooks’ pattern is fairly consistent: he sketches each individual’s life, highlighting struggles won and weaknesses overcome (or not), and extracts lessons for the rest of us. In general, he celebrates hard work, humility, self-effacement, and devotion to a true vocation. Early in his text, he adapts the “Adam I and Adam II” construction from the work of Rabbi Joseph Soloveitchik, Adam I being the more external, career-driven human, Adam II the one who “wants to have a serene inner character.” At times, this veers near the Devil Bugs Bunny and Angel Bugs that sit on the cartoon character’s shoulders at critical moments. Brooks liberally seasons the narrative with many allusions to history, philosophy, and literature. Viktor Frankl, Edgar Allan Poe, Paul Tillich, William and Henry James, Matthew Arnold, Virginia Woolf—these are but a few who pop up. Although Brooks goes after the selfie generation, he does so in a fairly nuanced way, noting that it was really the World War II Greatest Generation who started the ball rolling. He is careful to emphasize that no one—even those he profiles—is anywhere near flawless.

The author’s sincere sermon—at times analytical, at times hortatory—remains a hopeful one.