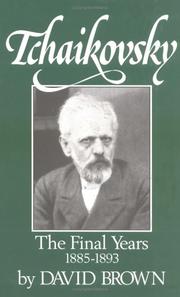 The third and concluding volume of Brown's monumental study (1983, 1986) of the Russian composer—which combines detailed musicological analysis (including generous excerpts from scores) with thorough, if not especially penetrating, life-history. As Brown himself says, ``it is a paradox of the professional man's biography that its externals can become less interesting as its subject's distinction and fame grow.'' So it is here: much of this undramatic book chronicles Tchaikovsky's late-blooming conducting career and his many tours. Even more space is devoted to critiques of the operas The Queen of Spades and Iolantha; the ballets Sleeping Beauty (which Brown finds profound as well as beautiful) and The Nutcracker (which Brown clearly loathes); and the Fifth and Sixth Symphonies, the former a ``compromise'' between Russian soul and Western form, the latter an uncompromising triumph, ``surely the most truly original symphony to have been composed'' since Beethoven's Ninth. Throughout, Brown is properly cautious—but not unimaginative—about finding autobiography in the music. The composer's homosexuality is mentioned occasionally, matter-of-factly, downplayed (to a fault, perhaps) rather than overplayed as in last fall's speculative biography by Alexander Poznansky. And, as for Tchaikovsky's death, Brown finds suicide the ``inescapable conclusion.'' Not the last word, of course: glasnost is likely to open up previously closed Tchaikovsky archives. But, for now, a solid windup to the critical biography for serious students and knowledgeable music-lovers.