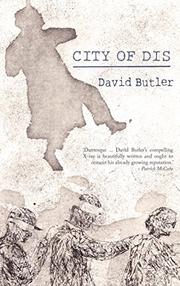 As the Dante invocation in the title suggests, the trio circulating in and out of Regan’s days contribute to hellish circumstances. An observer who acted for years as the eyes for his blind mother, Regan sees patterns everywhere. He’s drawn to symmetry by the desire to know if coincidences exist or if fate prevails, a conversation that deepens when he befriends brooding priest Ciaran Crowe. One pattern that Regan mixes up is chronology: he randomly weaves together the absurd consequences set off by seeing Joseph Mary Danaher, a bully from his childhood who is now a burglar responsible for killing an elderly woman. This storytelling foible adds both suspense and levity. It’s often Regan’s acquiescence to others that causes trouble rather than anything he instigates. Danaher invites himself to use Regan’s place as the hideaway for a padlocked bag. Regan saves the second of the trio, Chester Maher, from attempted suicide only to discover that Maher, an amateur composing “an opera without music,” knew his dead mother. She was “the first woman to give [Maher] a number of sleepless nights.” Intrigued by the stranger’s memories, Regan begins rendezvousing with him regularly. The third character anchoring this peculiar milieu is Yelena, a Polish woman he thinks of as his girlfriend despite her insistence that they have no relationship. For her, he signs his name to countless documents he doesn’t understand, perhaps because “the Irishman loves his girlfriend best, his wife the most, but his mother the longest.”

A dark romp featuring delightfully crackling dialogue and the mental gymnastics of a protagonist so on edge he tries to silence a yowling cat with poison.