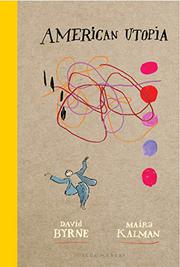 The companion volume to the author’s acclaimed Broadway production of the same name.

Conceived before the pandemic, Byrne’s collaboration with New Yorker illustrator Kalman proceeds through a series of sparsely rendered full-color images about connection and how it feels to be together even when we are each alone. The author opens with what seems like a statement of purpose: “Despite all that has happened, despite all that is still happening, I think there is still possibility—we are still a work in progress. We’re not fixed, our brains can change. Who we are thankfully extends beyond ourselves...to the connections between all of us.” It’s a slim, suggestive volume, with sparing use of words amid the stark imagery. At times, it feels like Byrne is channeling the aphoristic, sloganeering spirit of Truisms, the shifting-viewpoint series of maxims by conceptual artist Jenny Holzer. “I’m not alone and we’re all the same, and the world won’t end, it will just change its name,” reads the accompaniment to two drawings of a woman who appears to be very much alone, dancing. “We’re only tourists in this life,” says another. Taken together, all of the text would likely fit on one page, and the sketches can be flipped through in a matter of minutes. The book is not a substitute for Byrne’s music or the Broadway musical—which is scheduled to return in September and will soon become a documentary by Spike Lee—but it does share the same sense of artistic daring, naiveté, and childlike wonder. “Here is an area of great confusion / No more information now / This is my job,” reads a simple haikulike passage that accompanies a series of seemingly unconnected drawings that proceed to the assurance, “It is safe right where you are.”

A comforting work of art in troubled times.