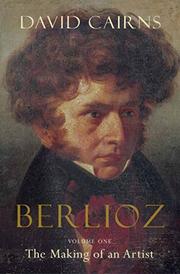 Nobly told saga of how a provincial outsider, bucking family and establishment mistrust, fashioned himself into France's

most daring 19th-century composer. Dr. Berlioz, justly portrayed by Cairns as a devoted father, never stopped decrying his son's rejection of medicine for music. But Hector Berlioz (1803–69), taking Gluck, then Beethoven as spiritual mentors, recognized his calling early, a process that Cairns fleshes out here with piquant asides: What prefigures the critic-creator better than the unwilling med student singing arias during dissections? Young Berlioz is shown beset by his split nature, a Romantic simultaneously driven by fire (or "spleen"), while observed by his alter ego with classical detachment. The factions of musical Paris set the stage for the swift-maturing apprentice's contretemps with the conservative Conservatoire: Cairns examines how Berlioz's orchestrally conceived compositions (where rhythmic complexity plays off timbral polyphony) outraged the status quo. There was no point, however, in trying "to break the magnetic needle because you can't stop it obeying the attraction of the poles"—and at length the weary judges granted Berlioz the Prix de Rome. His travels, mapped out with high local color, furnished matter for his entire oeuvre. The pithy letter-writer and pungent reviewer (ever the composer's advocate) corroborates the gracious narrator-critic and conductor Cairns (The Memoirs of Hector Berlioz, 1969), who has scoured the Berlioz archives for the past 35 years. The tale pauses at the reappearance of English actress Harriet Smithson: After her Ophelia opened Berlioz's eyes to Shakespeare's glories in 1827, she rejected his advances, thus inspiring the id‚e fixe underpinning the innovative Symphonie Fantastique. The 1832 premiere, excitingly re-created, announced the composer's maturity and duly persuaded her to become Berlioz's partner in ill-starred marriage. A sumptuous feast for lovers of music and biography, this volume feeds the appetite to learn the reasons behind how the