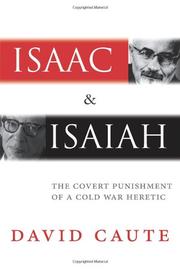 The Covert Punishment of a Cold War Heretic

What first appears to be a narrowly academic profile of two rival scholars amplifies into a trenchant, engaging study of the postwar split between the New Left and Western liberalism.

Historian Caute (Politics and the Novel During the Cold War, 2009, etc.) was privy to Isaiah Berlin’s attempts to blackball Isaac Deutscher from gaining an academic post in 1963, when the author and Berlin were both fellows at All Souls College, Oxford. In this sharply argued work, the author develops and clarifies their feud in light of Cold War attitudes. Both brilliant minds who hailed from Eastern European Jewish families and eventually took refuge in England from totalitarian violence, the two writers, journalists and historians made their way in British academia and publishing with remarkable success, though with vastly different ideological takes regarding the Soviet Union. As the Cold War ramped up, both became enormously in demand to delineate the struggle between the Soviet Union and the West. For Berlin, the notion of individual liberty and responsibility dispelled any illusions about Soviet reality and Marxist determinism, while Deutscher, whose formative years were spent as a member of the Polish Communist Party, was a well-connected Marxist whose deeply researched biographies of Stalin, Trotsky and Lenin were considered as helpful explanations to the West as well as apologies. Recognized as an international relations expert, Deutscher hoped to move from journalism to academia but was thwarted by Berlin, serving on the advisory board, who denounced his rival in confidential letters as being “morally intolerable.” Caute astutely probes the contentious issues, including concepts of history, Zionism and life for dissident writers in the Soviet Union.

The author’s wit and biting analysis render this a most readable study.