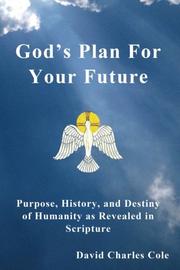 GOD'S PLAN FOR YOUR FUTURE

A comprehensive introduction to the Bible that treats it as an instruction manual for morality.

Debut author Cole asserts that relying upon Scripture for moral guidance has become unfashionable, thus leaving younger people rudderless in a world of temptation. However, he believes that the path to salvation is charted in the Bible, when properly understood. The author grants that Scripture can be complex— it communicates different messages to different people, sometimes employs hyperbole, and often engages in cryptic symbolism— but that doesn’t mean that its principal points can’t be understood. Cole offers a comprehensive guide to the Bible that takes novices on an impressively thorough tour. He begins with the account of Jewish history provided in the Hebrew Scriptures, followed by a chronicle of the life and ministry of Jesus Christ; he then discusses the future as prophesized, and the nature of moral obligations and God’s promises. Cole uses the King James Version of the Bible, and only slightly revises the text to make it more accessible to modern readers. His book concludes with a series of appendices, some of which discuss relevant contemporary issues, such as the conflict between divine creation and evolution and the biblical stance on astrology. The crux of Cole’s reading is that the Bible isn’t merely one book among many, but the revealed word of God, given to humanity to assist people in their earthly lives. His mastery of the material is extraordinary, especially as he’s neither a professional historian nor theologian, and he dexterously links the ancient message of the Bible to modern life. For example, there’s an engaging discussion of the doctrine of election (the idea of being “chosen by God for His purpose”) and an account of 20th-century Zionism. The prose is habitually clear and highly readable by even the least knowledgeable beginner. However, some moments are overly strident, leaving no room for philosophical discussion (“Don’t be deluded into thinking Satan is not real or lacks great power”). Still, for religious readers in need of assistance interpreting the Bible, this is a sound one-volume introduction.

VICTORY EVERY DAY IN EVERY WAY
by Clarence Washington Sr.
Newsletter sign-up