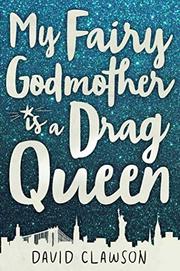 MY FAIRY GODMOTHER IS A DRAG QUEEN

When Prince Charming meets his beau….

Seventeen-year-old Chris Bellows is pretty much a modern-day, white, male Cinderella. He’s at the beck and call of his WASP-y, boozy, socialite stepmom, Iris, his bitchy, attention-hungry stepsister, Kimberly, and his jock douchebag stepbrother, Buck, who has an endless supply of gross one-liners on tap. The novel opens with Chris helping his family get ready for New York City’s most elite social event, The Autumnal Ball at The Plaza. Once the steps are on their way, Chris runs into a fabulous, shade-throwing, foulmouthed African-American drag queen named Coco Chanel Jones, who, in true fairy-godmother form, decks him out in some oversized Ferragamos plus a fancy suit. Before he knows it, he’s inside the party making googly eyes at the prince of New York City society, dreamy, white J.J. Kennerly. Readers can imagine what happens next. Clawson clearly loves all of his characters, as they are eloquently drawn, with just as many reasons for readers to love them as faults. He also knows how to spin double-edged zingers that are simultaneously gross yet witty: “You’re later than my first period.” What ensues is a fast-paced, riotous, laugh-out-loud yet insightful story of secret love between two closeted gay teens, with Kimberly unknowingly serving as J.J.’s beard.

A fresh, funny, new twist on a classic fairy tale