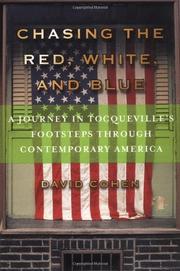 CHASING THE RED, WHITE, AND BLUE

A Journey in Tocqueville’s Footsteps Through Contemporary America

British and South African journalist Cohen tours America and pulls Alexis de Tocqueville inside out, or perhaps simply pulls the wool from his eyes, in this sad song to the country’s economic disparities and ethical malaise.

Tracing the route that Tocqueville took 160 years earlier, with a kicker thrown in to Silicon Valley, Cohen is curious to see whether the defining elements in the national character discerned by the Frenchman—equal opportunity in the pursuit of wealth and a pronounced religious strain—still operate. Did the gentleness and compassion pertaining to equality still exist? Did it ever? Cohen’s answer: No. Back in the 1830s, any “equality of conditions,” in Tocqueville’s words, didn’t apply to blacks and Native Americans, whom Tocqueville had removed from the equation. Also, citing historian George Wilson Pierson, Cohen writes that Tocqueville was roaming the land “when a great humanitarian movement was just gathering way . . . the conscience of America was awake.” The author, on the other hand, discovers a nasty tear in the social fabric, a seismic shift in wealth that has undercut any empathy evidenced when there is a relative equality of material conditions, resulting in a jaundiced eye toward need, a widening income gap, and a level of poverty to steal your breath: In Flint, the poverty rate for children under 6 is 57%, whereas nationwide “an astounding 40 percent are living in poverty or near poverty.” Cohen does find that among churchgoers there is an equal split between progressives and conservatives, though certainly no consensus on how to reach out to the needy; and tellingly, one of the few areas of economic parity is on the gambling-house floor, where race and class matter not on the terrain of the “(un)even playing field.”

Rich get richer, poor get poorer, and the ethical brakes to accumulation and the floodgates to generosity are all gummed up: Tocqueville wore blinders, Cohen suggests, and the aspirants to the American Dream are fewer with each passing day.