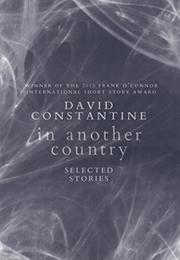 A selection of short fiction by a British author, poet, and translator, this book aims to correct the problem of Constantine’s obscurity in North America.

If nothing else, these 17 stories—crafted over the course of 30 years—demonstrate the admirable consistency of Constantine's writing, both in subject matter and quality. Sometimes stuffy, sometimes beautiful, sometimes chatty, Constantine’s work is what people mean when they call something “European.” In other words, the stories are slow, chilly, cerebral, whispers rather than shouts. But they are not entirely indirect; rather, Constantine chooses his moments to strike. That way, when a man named Mr. Carlton cries at the end of this book, it's an emotional scene that feels earned because of the author’s restraint elsewhere. Are these stories sometimes too spare, too reserved? Perhaps. But then, many of Constantine’s characters are reserved people, and his world sometimes recalls those of Harold Pinter and Ian McEwan, in which the banal niceties of comfortable living—dinners, funerals for colleagues, business trips—seem to conceal great menace. You know that popular cliché—the tip of the iceberg? Well, it’s what goes unspoken in so many of these stories that seems so powerful. And then, there’s the ice itself: in “The Loss,” ice becomes a metaphor for the frustration of a man who has lost his soul. In the chilling title story, ice is what encases a young girl, killed while exploring a glacier, only to be found decades later, “just the way she was. Twenty, in the dress of that day and age.” This ice becomes so powerful that it spreads across the entire collection; even when a man and woman have tea near water (as in “Tea at the Midland”), all the reader can think about is the frozen world ahead.

An author who deserves serious consideration.