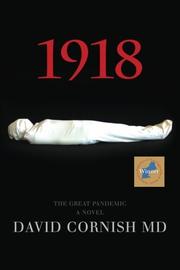 A U.S. physician with a specialty in infectious diseases fights against the 1918 influenza pandemic in Cornish’s debut work of historical fiction.

Maj. Edward Noble, overseeing American soldiers during “The War,” is ordered back to Boston to ensure diseases don’t continue to spike the mortality rate. He soon learns of the high death rate from influenza, which only increases when the virus crops up in other countries and then returns to the States as a much deadlier strain. Dwindling hospital staff and medical supplies are just part of Noble’s troubles. Warning the public of a pandemic isn’t easy when certain powerful people refuse to accept that influenza is a disease. Cornish’s novel has surprisingly few characters considering its scope; it clocks in at more than 750 pages. But keeping the cast manageable proves to be a great asset; it still shows the flu’s reach while concentrating on the sympathetic Noble; his wife, Lilly; and their five children. The doctor faces plenty of obstacles professionally—alerting people about the virus incites the surgeon general, who asserts that influenza is not a concern—as well as at home, where none of his loved ones are immune to the disease. Supporting characters shine, including Col. Victor Vaughn, a good friend to Noble’s late father; Akeema, the nanny treated as family; and Cmdr. Richard Cunard, Noble’s nemesis since Lilly chose Noble instead of him back at Boston University. Cornish loads his story with medical jargon. Most of it can be deciphered via context, like “roentgenograms,” which are X-ray photographs. But the surplus of terminology can be a deterrent: The dramatic punch of caring for a sickly family member is softened by cold clinical descriptions, both in the dialogue between Noble and Lilly and in the repetition and recording of vital signs (pulse, blood pressure, etc.). Regardless, Noble is an appealing, knowledgeable focal point in this fictionalized rendering of the great influenza pandemic.