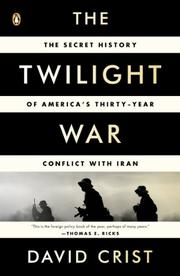 The Secret History of America's Thirty-Year Conflict with Iran

An encyclopedic account of the ongoing military and diplomatic conflict between the United States and Iran.

Since the fall of the shah in 1979, Iran and the United States have been thorns in each other's sides. Iran seeks recognition as a regional power and as a champion of Shia Muslims throughout the Middle East, but its policy toward America has often been driven by a "paranoia that the real goal behind U.S. actions was the overthrow of the Islamic Republic." America, for its part, has consistently "helped perpetuate the animosity [by displaying] a callous disregard for Iranian grievances and security concerns." The result has been an ongoing "shadow war" in which each side has inflicted grievous casualties on the other without quite falling into open belligerence, while missing numerous opportunities for rapprochement. In a monumental debut, senior government historian Crist presents a comprehensive narrative of this conflict from the ascendancy of the Ayatollah Khomeini to the present day. Drawing on extensive access to American government leaders and documents, Crist surveys his topic in thorough, if sometimes ponderous, detail, including coverage of the bombing of the Marine base in Beirut, the Iran/Iraq war, the arms-for-hostages scandal, the naval battles of the "tanker wars,” Iran's involvement in post-Hussein Iraq and its present pursuit of nuclear ambitions. Completely in command of the competing interests and personalities at the highest levels of American policymaking, Crist has an equally impressive grasp of the ebb and flow of diverse viewpoints in Iranian religious, political and military councils. The battle scenes are edge-of-the-seat gripping, and the author is keenly insightful on the byzantine diplomatic maneuvers, by turns farcical and dismaying, and the motivations of the politicians, clerics, Cold Warriors and con artists who have stoked the ongoing tensions between the two nations in spite of important common interests.

Some casual readers may be turned off by the page count, but this is likely to be the authoritative history of the origins and progress of the Iranian policy morass for years to come.