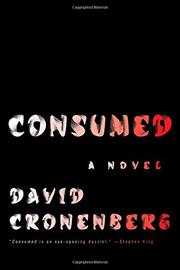 In film director Cronenberg's first novel, an odd (to say the least) Parisian couple—Naomi, a tabloid reporter who uses spying techniques, and Nathan, a photojournalist who shoots controversial medical procedures—have extreme sexual adventures while competing with each other for the ultimate scoop.

Naomi is investigating the disappearance of a famous French philosopher, Aristide Arosteguy, who is suspected of killing his wife, Célestine—and consuming chunks of her. She tracks him down to Japan, where she trades sex for his confessions—and much more. Her lover, Nathan, contracts a rare sexually transmitted disease after coupling with the cancerous patient of a discredited Hungarian surgeon. He goes to Toronto to meet the researcher his disease was named after. He has strange encounters with the researcher's daughter. Unsettling surprises are in store for everyone. Cronenberg's fascination with human flesh and its relationship to and interaction with technology—in this case, a full regalia of laptops, cellphones, iPads and cameras—will be familiar to those who have seen his films. The rampant couplings, as you might guess, are anything but titillating. But Cronenberg, who has never made what could be called a comedy, delivers one here in detailing his hapless characters' misadventures. Stripped of their obsessions and digital equipment, Naomi and Nathan are empty vessels. Like many of us, they've spent so much time in an artificial world that it's eaten away at the meaning in their lives.

Cronenberg's literary debut is not for everyone, but those who enjoyed eXistenZ and Naked Lunch will find much to like here.