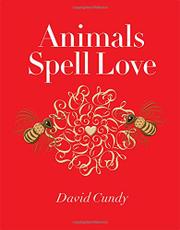 A series of fanciful animal portraits, constructed using only the letters or signs for “Love” or “I love you” in 16 languages (or 18, depending how you count).

Style definitively trumps legibility here, whether the sentiment is expressed in English or Amharic, Thai, or American Sign Language. Even for the nine tongues that use non-Roman scripts, Cundy, a veteran typographer, chooses multiple typefaces and throws in so many swashes and dingbats that the animals are rarely recognizable and the words composing their bodies thoroughly disguised. Fortunately for readers, he identifies all of the creatures, scenarios, and languages in his accompanying narratives. Unfortunately, he also adds sometimes-daunting challenges, such as finding a tiny heart placed amid thousands of spiral ornaments on the Hebrew page or counting the hundreds of “Love letters” that make up the ornate flowers he assembles for English. Also unfortunately, his pronunciation guidelines are idiosyncratic—the umlaut in the Swedish “älskar” is rendered as a glottal stop following the pronoun “Jag,” for instance, while the short “a” in the French “L’amour” is given as is, but the same sound in the Italian “Amore” is “Ah.” Between a pretty if perfunctory world map that doubles as index and a complete tally of typefaces and ornaments, he concludes “Any way you say it, ‘I love you’ means the same thing to everyone!”

The sentiment is true even when obscured, as here, by ostentatious graphic design.