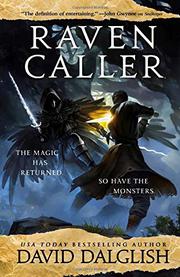 When the world changes, will you change with it?

A boy who takes pleasure in causing pain meets a monster who can teach him to do much more. A Soulkeeper puts his reputation on the line to stop the abuse of soulless humans—while concealing his relationship with an "awakened" formerly soulless woman. A religious woman given unimaginable power over human souls by a monster struggles to determine right from wrong, faith from blasphemy. In a world where mountains walk, prayers can change the physical world, and magical creatures like talking rabbit-soldiers have awoken from a centurieslong slumber, no choice is simple. The Soulkeeper Devin has chosen to befriend creatures like the faery Tesmarie while his spellcasting brother-in-law, Tommy, believes the newly awakened magical creatures have as much right to the land as humans do. In a time when most humans are reacting with fear and anger to their changing world, seeing the world in shades of gray can be dangerous. Meanwhile, Devin’s sister, Adria, finds that her new powers are testing her faith and bringing up questions she’d rather not confront. As new magical threats to the human population arise, all of these characters will be pushed to their limits, and the decisions they make may determine the fate of humanity. Picking up where Soulkeeper (2019) left off, this second book in a planned trilogy raises the stakes for every character, complicating the moral choices they face. The plot rockets along from one magical battle to the next, but Dalglish deftly weaves in rich character development alongside all this action.

Fans will love the second installment of this dark fantasy about very human characters beset by inhuman dangers.