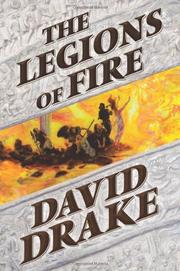 THE LEGIONS OF FIRE

Drake (In the Stormy Red Sky, 2009, etc.) embarks on a new four-volume fantasy cycle whose setting is early Imperial Rome, although, to avoid comparisons with historical fantasy, Drake changes the city’s name to Carce.

Unfortunately, Drake’s backdrop puts tedious emphasis on protocol and the niceties of servant-aristocrat interaction, seemingly to cover up a plot that’s not even half thought-out. Rich, influential but gullible senator Gaius Alphenus Saxa closets himself with Nemastes, an evil Hyperborean wizard who brings dire warnings about the destruction of the world by fire. On a volcanic island in the far north, meanwhile, 12 associates of Nemastes prepare to release the hordes of fire-demons that will achieve said destruction. In Carce, Varus, Saxa’s son, holds a poetry reading attended by his warrior friend, Publius Corylus. Somehow they both become entangled with one of Nemastes’ spells and both are hurled, briefly but eerily, into other worlds. Soon, dryads spring from the fruit trees in Saxa’s courtyard and push Saxa’s young wife Hedia and his tomboyish daughter, Alphena, into strange new worlds. Finally, Corylus ends up in an ice-age world, while Varus travels elsewhere to meet the god Odin. Now each of the four youngsters—by now recognizable as stock computer-game avatars—must meet didactic challenges, acquire powers or perform services in order to progress. Computer-game enthusiasts will find all this familiar and, despite the lazy sprinkling of magical tropes, unedifying.

Hard to see how this sloppy, unambitious nonsense could pry its target audience away from their game consoles.