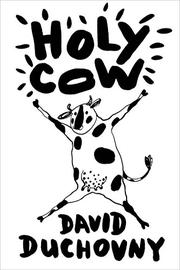 A conflicted cow, a Jewish pig and a debonair turkey seek acceptance and enlightenment during a journey across the Middle East. Stop us if you’ve heard this one before….

Long before he became the face of The X-Files’ Fox Mulder or Californication’s Hank Moody, Duchovny earned a master’s degree in English literature from Yale and was on his way to a Ph.D. As it turns out, his debut novel is a charming fable about dignity and tolerance, complete with anthropomorphized animals and replete with puns, double-entendres and sophisticated humor. The book is narrated by Elsie Bovary, a cow on a small farm in upstate New York  who has a clear knowledge of the kind of story she is telling. “I don’t know if you’ve read Animal Farm. It seems like that’s a book all human children have to read. Personally I prefer Charlotte’s Web, though spiders can be tricky—Harlot’s Web anybody? (And eight legs? Really? Two or four is the appropriate number of legs, everybody knows this. Maybe five, maybe. Eight seems desperate to me, or indecisive, indulgent even. You know?)” Upon learning how cows are slaughtered, Elsie plots her escape. To aid her efforts, she agrees to team up with Jerry—also known as Shalom—a Torah-reading pig who plans to use kosher dietary laws to his advantage in Jerusalem, and Tom Turkey, who wants to move to Turkey, naturally. After the obligatory training montage, the trio are off in their human disguises, traveling from Turkey to Israel to Palestine and finally Mumbai. Elsie has a very funny narrative voice, dropping bits of screenplay, suggestions for movie stars to cast (Jennifer Lawrence!), and clever but understated nods to pop culture, rock music and the value of faith. Between the book’s sly humor, gently humanist (animalist?) message and wry illustrations by Natalya Balnova, this is a pseudo–children's book that smart adults should greatly enjoy.

An offbeat adventure that reads something like Bill Willingham’s Fables directed by Ralph Bakshi.