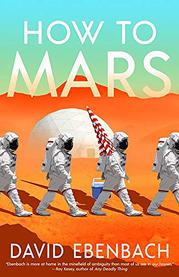 Six Marsonauts must survive on the red planet after their reality TV show is canceled in this delightfully unconventional novel.

Two year after having been chosen to receive one-way tickets to Mars for a lifetime of research—all while living under constant surveillance for TV—six scientists are finding life undeniably monotonous, especially since their show was canceled because of low ratings. "After a while even scientists can get bored of science. Especially here. Mars, I can tell you, is pretty much rocks, rocks, rocks,” according to Josh, a psychologist. But when Jenny, the astrophysicist, realizes she's pregnant after having begun a romantic relationship with Josh—although the Destination Mars! handbook repeatedly stresses that sex is strictly forbidden—the small community must come together to resolve the looming issues associated with welcoming a newborn into their cramped habitat. Not surprisingly, once the TV producers are made aware of Jenny’s pregnancy, the show is brought back and ratings soar. Told from the perspectives of various characters—even ethereal Martian life-forms that refer to themselves as the Patterns—and complemented with excerpts from the Destination Mars! handbook and Jenny's humorous research notes, the story has a strong sense of whimsy, but Ebenbach also creates depth by exploring issues like engineer Stefan's feelings of estrangement and violence and Jenny’s guilt over her sister's suicide years earlier.

A poignant examination of what it means to be human.