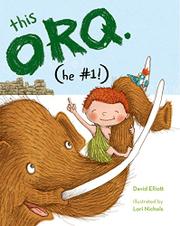 From the Orq series

No. 1 cave boy loses his mojo and his reputation when a flashy new kid comes along.

Little Orq and his pet mastodon, Woma, are the pride of the cave community. Orq can throw far, climb high, and run fast. (He’s a tiny, redheaded, white lad in a one-shoulder outfit that looks made of grass.) Woma sleeps lots, eats tons, and loves plenty. They are No. 1. “Everybody think so.” That is, until Torq comes along, with his big gray pet, Slomo, who resembles a giant sloth. Torq throws farther, climbs higher, and runs…“you get picture.” Torq becomes the new No. 1. Everybody thinks so, especially Torq himself. Orq’s mother tells him not to worry, but her advice falls on deaf ears. One day, Torq decides to climb a high mountain, far away from his home cave. Orq naturally follows, along with Slomo and Woma. The reckless Torq takes a tumble, hurting his ankle very badly. Orq springs into action, making a platform out of tropical tree trunks and then inventing the wheel to make a cart Woma can pull. Orq and Woma are No. 1 again. “Everybody think so.” Especially Torq, whom readers see zooming by in a cool, newly invented wheelchair. Elliott’s hilarious, clipped prose is the star of his third Orq adventure. Nichols’ pencil illustrations are drolly in tune, though they depict an all-white prehistoric society.