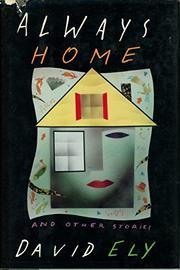 Peculiar is perhaps the only word that does justice to the wide range of stories included in this second collection by the author of such novels as Seconds and The Tour. Here, Ely shows himself to be—as ever—a producer of striking effects, round- the-bend characters, and Halloweenish events. The title tale concerns a lonely suburban housewife ensconced in a home rigged with so many burglar-repellent devices that ``it's as safe as Fort Knox.'' During her husband's frequent absences, however, she discovers dangers of a more insular sort, as she grows dependent on the company of her Always Home system, which produces recorded voices to ward intruders off. In the end, the voices take over completely and drive the poor hausfrau out. Other unnervers include the stories of a multinational schizophrenic who, in the mind-set of a Japanese, disembowels himself, and that of a renowned gourmet whose tastes become so refined that he dies of starvation after being unable to locate a good meal. Ely's collection also holds a few clunkers, like the didactic and simple-minded ``Rockefeller's Daughter,'' as well as occasional, welcome mood swings—''Indiana Summer,'' for instance, a reminiscence about a boy's sojourns with his grandmother. Almost all of these stories first appeared in magazines (including Atlantic, Playboy, and Redbook), where, taken singly, they possibly would have made their mark. But in this eye-glazing circus parade, it's the author's showiness that finally stands out.