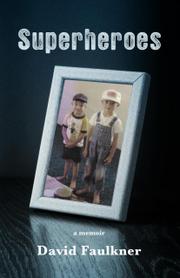 In this debut memoir, the author recounts his childhood and the horrific results of his mother’s remarriage to an abuser.

After a dramatic opening framing episode, Faulkner (born in 1977) describes a fairly ordinary American childhood of birthdays, comic books, TV, movies, holidays, school, friendships, and playing superheroes with Robert, his older brother by two and a half years. His parents’ divorce was an adjustment, but not traumatic—until 1986 and the following year-plus when Faulkner’s mother married Bob. Drunk, raging, verbally abusive, and violent, Bob hit the boys until they agreed to tell social services that their father had molested them. Bob claimed their dad was possessed by the devil. He made them discard all their toys. Beatings and verbal abuse were frequent. Finally, their mother took off with Bob, leaving the boys with their aunt and uncle and warning that if they ever told the truth, Bob would kill them and their father. The boys’ new situation wasn’t much better, considering their aunt believed the boys were possessed by demons. Finally, after being threatened with state custody, Robert blurted out the truth: “Our dad never molested us.” This admission changed everything; the boys’ father regained custody and Bob disappeared with their mother. The boys were safe. Faulkner writes convincingly and movingly of the fear, confusion, and pain he and Robert suffered. That this went on for over a year without intervention is a crying shame. Using religion to abuse children is an underdiscussed topic and an important one. Including other viewpoints—his father’s, his brother’s—would have been interesting, but Faulkner seldom goes beyond his limited childhood perspective. He conveys atmosphere well, such as the slot machine–filled Reno airport: “its interior smelled like a combination of adventure and cigarette smoke.” However, the uneventful years before Bob—often described in clichéd phrases like the “tingle of magic in the air” at Christmas—feel generic and bland, and Faulkner’s flat affect can even become off-putting as when describing his parents’ sometimes callous treatment of pets.

Somewhat one-dimensional but an addition to the literature on religious abuse.