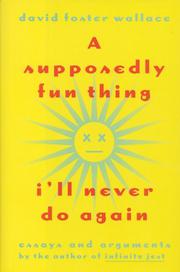 Wallace is a fine prose stylist of the post-Beat school. His long sentences overflow with prepositional phrases; commas are scarce. At his best—which is to say, about half the time here—Wallace writes with an intensity that transforms rambling reportage into a sui generis mode of weird philosophizing. He makes deft use of footnotes to pile up insights beneath the flow of his main line of thought. Especially brilliant is the collection's opening essay, in which Wallace looks back on his childhood experiences as a Midwestern junior tennis star through the lens of his collegiate obsession with mathematics. The tennis world, treated at length in Infinite Jest, resurfaces in a sensitive profile of rising American player Michael Joyce. Otherwise, Wallace's best work comes in two pieces that originally appeared in Harper's: a ferocious investigative report on the culture of luxury cruises, and the record of another carnival voyage, this one a trip to the Illinois State Fair. A book review competently discusses literary-theoretical debates over the death-of-the-author thesis. Elsewhere in the volume, Wallace takes determined dives into banality. A more judicious, albeit less focused, effort finds Wallace on the set with filmmaker David Lynch, whom he presents as a contemporary artistic hero. A sprawling meditation on television and contemporary fiction lays out many intriguing theories, but its main point, that TV irony snares rather than liberates viewers, doesn't make news. At his best, the exuberant Wallace amazes with his “Taoistic ability to control via noncontrol.” But—to continue quoting from his opening tour-de-force, “Derivative Sport in Tornado Alley''—eschewing discipline exacts a price: “Force without law has no shape, only tendency and duration.''