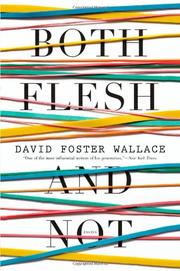 BOTH FLESH AND NOT

Previously uncollected essays and reportage by the late author, reflecting his varied interests, from tennis to Borges to higher math.

This collection is arranged not in terms of chronology but notoriety: It’s front-loaded with three pieces that Wallace fans have long wished to see in book form. “Federer Both Flesh and Not” is a bracing critical study of tennis star Roger Federer at Wimbledon in 2006; though Wallace spent face time with the star, quotes are tucked into the author's trademark footnotes, and he writes mainly as a spectator admiring the power of the human body to perform at extraordinary levels. “Fictional Futures and the Conspicuously Young” is a potent 1988 essay on the roots of what he felt was largely threadbare minimalist fiction. “The Empty Plenum,” an encomium to David Markson’s 1988 novel Wittgenstein’s Mistress, explores the philosophical machinery behind the book and serves as a careful defense of avant-garde fiction. The remainder of the collection is weaker, composed of book reviews and brief essays on politics, sex and the writing life that feel less impassioned than commissioned. A report on the 1995 U.S. Open is a shallower version of Wallace’s infamous cruise-ship article, and a 2001 essay on prose poems fractures the traditional essay form into bullet points to little effect. The best overlooked work here is a set of usage notes contributed to the Oxford American Writer’s Thesaurus: Wallace has a blast riffing on the fine points of “pulchritude,” “unique,” “hairy” and other words. To stress his status as a lifelong word maven, the pages between pieces are filled with words and definitions from Wallace’s personal vocabulary list, from “croker sack” to “pyknic.”

Not altogether Wallace’s finest work, but it brings some welcome exposure to some of his best pieces.