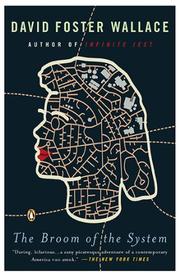 THE BROOM OF THE SYSTEM

This unusual debut, the first novel to be published simultaneously in hard-cover and as a paperback in Penguin's "Contemporary American Fiction" series, suffers from a severe case of manic impressiveness. Wallace, a recent Amherst grad, is something of a puerile Pynchon, a discount Don DeLillo, and even a bit of an original. Brimming with subplots, stories within stories, countless one-liners, and a cast of characters worthy of some sort of postmodern Dickens, this bulky fiction, when it isn't plain tedious, seems to he a big inside-joke. Almost every male in the book went to Amherst, from Rich Vigorous (class of '69), the head of Frequent and Vigorous Publishers, to Andrew Sealander "Wang-Dang" Lang (class of '82), a former frat boy and campus swell, now married to Mindy Metalman, a "Playboy-Playmatish JAP from Scarsdale," whom Wanger met one night on a roll to Holyoke. But that doesn't begin to explain how Vigorous, with his abnormally small penis, and the strapping preppy meet in Amherst in 1990, the year in which most of this self-consciously strange book takes place. The connection between them, and between just about everyone else here, from sexy Candy Mandible to cruel Stonecipher Beadsman III, is the former's roommate and the latter's daughter, Leonore Beadsman, an overeducated switchboard operator at the Bombardini Building in Cleveland, Ohio. That's not far from the corporate headquarters of Stonecipheco, the family-owned baby-food company in fierce competition with Gerber's. Also nearby is the nursing home from which Leonore's great-grandmother, a former student of Wittgenstein (that "mad crackpot genius"), has strangely disappeared, thus setting into motion the hyperactive narrative. Jokes about fiction by "a nastily troubled little collegiate mind" should give readers further reason to pause. Wallace dabbles in big ideas, with too many pseudo-Wittgensteinian pauses ("'. . . .'") and much callow satire on consumer/evangelical America. Despite flashes of real genius, it's a heady Animal House vision.